What happened to currency fixings?

My general guideline to fixings is that all fixings are manipulated, which is exactly why they have been invented. It is quite astonishing that it took several decades to discover this simple fact. Never mind. Now that manipulations of currency fixings have been examined and many fines have been paid, let us recap how the fixing production has been reshaped.

Baseline: Currency fixings are official reference exchange rates published by allegedly credible institutions or organizations. They are usually published for each business day. Conversely, a cutoff marks the end of a trading day and the beginning of a new trading day. Most common examples are the 3pm Tokyo cut and the 10am New York cut. Traditionally, for currency options, the cutoff time is the time on a trading day by which the holder of an option can exercise the option. Exercising it triggers a cash flow, i.e. the holder receives the call currency amount and pays the put currency amount. For this cash flow, a reference spot ST  is not needed. A reference spot is only required if an option is contractually cash-settled or to calculate bespoke payoff-based derivatives values and settlement amounts. For such contracts, the reference is usually a currency fixing.

Fixings can be sourced from various providers. They differ in the way they are calculated, by the sources the provider uses to calculate a fixing, and by how transparent the provider is about the fixing calculation.

ECB is a daily fixing published by the European Central Bank (ECB) on the Reuters page ECB37, with delay, and only against EUR. Complaints of the trading community about the delay in publication animated the ECB to increase the delay even further. In fact, institutions that publish fixings as a reference for the valuation of financial contracts, need to comply with the new IOSCO guidelines, which the ECB has deliberately decided not to fulfill, therefore purposely discourages the use of their fixings. No comments.

WMRSPOT refers to the daily fixing by World Market, previously managed by the State Street Company, acquired by Thomson Reuters on 1st April 2016.

FEDFX refers to the noon FX fixing of the Federal Reserve Bank. Note is it not FEDEX.

BFIX refers to the Bloomberg fixing, which is also published on
http://www.bloomberg.com/markets/currencies/fx-fixings.

Fixing Calculations: Since 2013 many improvements have been made. The International Organization of Securities Commissions (IOSCO) published a guideline for financial benchmarks and conducted periodical reviews on the key benchmark rates used in the industry. This framework pushed the reference rate providers to publish their methodology, be more transparent and keep a stronger connection with the investment world to make their products more relevant.

Reuters Fixing Input rates are selected from different platforms accordingly to the tradability of the currency. The three sources are Thomson Reuters Matching, Electronic Broking Service (EBS) and Currenex. As an example for the spot rate we consider the Trade Currencies methodology: The process of producing the WM/Reuters benchmark rates can be decomposed into the following steps (in the scenario where enough valid trades are in the pool):

Bloomberg Fixing The methodology used to compute the BFIX is a Time-Weighted Average Price (TWAP) of the BGN mid rates. This average is taking into account data before and after the fixing time. Every BFIX rate is divided in multiple slices of one second. The inputs for every slice are the geometric mid rates of the BGN bid and ask ticks. The TWAP is then computed based on those data points, using a triangular formula, as exhibited in the following figure showing BFIX TWAP weights assigned to the 306 snapshots. 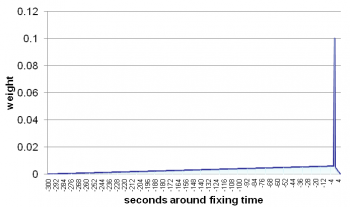 The peak of the triangle is the fixing time and carries a weight of 10%. Around this peak, weight of every slice is decreasing linearly. As a result, the pre-fix time weight approximately 88.52% and the post-fix time 1.48%.

This common rule varies according to the time window assigned to the TWAP. This time frame is determined according to the currency. BFIX rates for currencies for the G10 countries a TWAP that starts 300 seconds before the fix and ends six seconds after the fix time. All other currencies have a window starting 900 seconds before and ending six seconds after.

Overall, it is important to note the difference between the BFIX rate and the WM/Reuters reference rate for this same time. This implies not only that the methodology differs but also that the selection of the sources are different from one platform to the other. This can have relatively important impact on reference rates for currency pairs that don’t have a very liquid market.

ECB Fixing The ECB fixing does not meet the IOSCO guidelines of transparency.

In summary, with the new guidelines the time windows have widened, averaging has been extended, and sources are specified, and methods are continuously monitored. Fixing governance, as I would call it. “Banging the close” will become harder.

I wish all our readers a happy and exciting year ahead.

MathFinance Conference has been successfully running since 2000 and has become one of the top quant events of the year. The conference is specifically designed for practitioners in the areas of trading, quantitative and derivatives research, risk and asset management, insurance, as well as academics.

As always, we expect around 100 delegates both from the academia and the industry. This ensures a unique networking opportunity which should not be missed. A blend of world renowned speakers ensure that a variety of topics and issues of immediate importance are covered.

Our confirmed speakers for 2017 include:

This event is a must for everyone in the quantitative financial industry.

More information on speakers, agenda to be found here.

Academics pay 495 EUR (+VAT) at all times. We kindly ask for proof of your affiliation.

There will be a cocktail reception followed by a conference dinner on the first evening.

We are looking for senior quant/ consultant in the areas of

Please send us your CV to recruitments@mathfinance.com

Do the following apply to you?

Then we would like to hear from you. Please send us your CV to recruitments@mathfinance.com

This website uses cookies to improve your experience while you navigate through the website. Out of these, the cookies that are categorized as necessary are stored on your browser as they are essential for the working of basic functionalities of the website. We also use third-party cookies that help us analyze and understand how you use this website. These cookies will be stored in your browser only with your consent. You also have the option to opt-out of these cookies. But opting out of some of these cookies may affect your browsing experience.
Necessary immer aktiv
Necessary cookies are absolutely essential for the website to function properly. This category only includes cookies that ensures basic functionalities and security features of the website. These cookies do not store any personal information.
Non-necessary
Any cookies that may not be particularly necessary for the website to function and is used specifically to collect user personal data via analytics, ads, other embedded contents are termed as non-necessary cookies. It is mandatory to procure user consent prior to running these cookies on your website.
SPEICHERN & AKZEPTIEREN