Those of you working on the more quantitative aspects of FX Derivatives and Structured Products, did you come across the term KOAMKIEU, and do you have any idea what it means?

It sounds like a new Japanese French fusion sushi, but the term KOAMKIEU refers to a double barrier option, with an American knock-out (KOAM) barrier and a European knock-in barrier (KIEU). We had this in the MathFinance Library since around 2009 when ICY software extended their product range and ICY used our Library. It turns out that these type of barrier options are traded also as investment products in private banking. I take this as an opportunity to explain some of the psychological aspects that play a role while buying and selling these. The KOAMKIEU is an example to learn from. It is a special case of a KIKO (knock-in-knock-out) option.

Let us have a look at Figure 1. A private banking client had been talked into taking an AUD-JPY based position indicated by the payoff. The upper barrier is an American knock-out at 103.40. The long AUD call/JPY put and the corresponding leveraged short AUD put/JPY call were struck at 97.50 and the lower European style knock-in barrier was at 89.50 (see also ref 1). 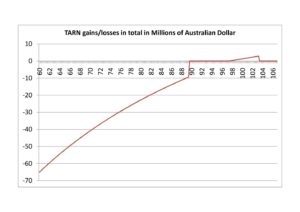 Generally, pricing and risk management of KIKOs is similar as for other barrier options as a KIKO can be decomposed into single knock-out (-KO) and double-knock-out barrier option (-DKO) options, so pricing and Greeks can be inferred from standard barrier contracts (see ref. 2). What I would be curious about is, why the KO barrier is American (i.e., continuously observed), and the KI barrier is European (i.e., only observed at maturity).

In the example the investor entered an AUD-JPY carry trade, because she assumed that in the short-term AUD-JPY would rise and knock out the KOAMKIEU quickly, so the investor takes home the premium and does another one of these deals. Making the upper barrier American increases the probability of a knock-out event, and in fact the investor should want the contract to knock out as quickly as possible. However, the forward curve in AUD-JPY is a backwardation scenario, so in the long term, because AUD interest rates are higher than JPY interest rates, AUD-JPY is more likely than not to drift lower. In that case the downside KI barrier will be triggered, and the investor faces a large loss. Making this lower knock-in barrier European decreases the probability of a barrier knock-in event. The deal works, because both the investor and the sell-side trader want the KIKO to knock out quickly, the investor, because it allows her to keep the option premium with the risk being eliminated, the trader, because he can then offer a new KIKO, earning sales margin and bid-offer spread again. On the downside, because the knock-in barrier is far away, losses do not crystallize until the barrier is hit, but only show up in the valuation, so psychologically the investor has the payoff graph in mind, but the actual negative value is not shown and difficult to grasp mentally. The KIKO is not risky for the trader as he does not take an unhedged position opposite to the investor, but just manages the Greeks in his derivatives portfolio, so is – broadly speaking – always hedged.

Another aspect shown in the payoff plot is that the loss does not appear to be linear with falling spot prices; and that is not because I had too much wine when plotting the graph, but because the payoff is shown in AUD, i.e., the unit on the y-axis is AUD. If it were JPY, the loss would be linear in the AUD-JPY rate. Showing the loss in AUD generates a hyperbola, of which we see a section of a branch (see ref. 3). The potential loss of this KIKO is infinite measured in AUD, as AUD-JPY approaches zero. Looking at FX markets really shows the symmetry features that one would never realize looking only at equity options.

And actually, it gets worse: the payoff traded wasn’t just one product, but only one leg in a strip of KOAMKIEUs, something called a KIKO TRF, i.e., a Target Redemption Forward, where gains were accumulated until a pre-specified target was reached, but losses could accumulate in an unlimited way. This brings me to another psychological aspects: profits are typically cash-settled immediately, but losses are accumulated via open option positions and only settled at maturity. Rolling forward losses is popular because they do not show up in the account balance, only in the MTM. Any profit is converted into cash and booked in the investor’s account, but losses are hidden in the valuation. Secondly, as a human being one is more likely to focus on one fixing at a time for a strip, whereas the risk is actually for the gross notional outstanding. These are common settlement procedures in accumulators and target forward contracts. However, that’s not risk management – that’s wishful thinking following the principle: I would rather have jam today than jam tomorrow. In the KIKO TARN under consideration, the investor suffered a large loss.

Given such a loss potential, one of the key psychological aspects in trading a KIKO is that it is done as a strip, i.e., as building block of an accumulator or TRF, so the initial premium is zero. These zero-cost structures feel like a free lunch, no money to put on the table, along with a high chance of a small gain, versus the low chance of a big loss. Trading KOAMKIEUs or KIKOs as a strip as part of a structure adds complexity, so even quants are not able to value a product by sheer gut feeling, leave alone a buy-side client. As additional appetizer, profits for the first pay-date or a few initial pay-dates are sometimes guaranteed upfront, placing the naïve investor in a seemingly riskless and comfortable position. Complexity per se is not bad but should be in line with the investor’s comfort level in structured products. The best way is to trade only products you as an investor really understand.

This same principle also applies to the sell-side operating dealer platforms, with tailored fixing schedules, leverage factors, profit counters and what have you. Accumulators and Target Forwards are also popular, because of yet another psychological trick: the pre-agreed exchange rate always beats the outright forward rate, so the client gets the feeling to beat the forward rate for free. This applies to both treasurers and private banking clients. The traditional structured forwards with worst case – where the pre-agreed forward rate is worse than the outright forward – are more suited to conservative corporate treasurers as we find them in northern Europe.  The more pro-active client likes the idea to get a deal upfront rather than something that is worse than the market and then waiting to break even.

This editorial is based on a Structured Products Chat with Charles Brown, Managing Director of MathFinance Asia, Adjunct Professor at National University of Singapore’ Risk Management Institute. Any views expressed by Charles Brown are purely his own, see reference 4.

This website uses cookies to improve your experience while you navigate through the website. Out of these, the cookies that are categorized as necessary are stored on your browser as they are essential for the working of basic functionalities of the website. We also use third-party cookies that help us analyze and understand how you use this website. These cookies will be stored in your browser only with your consent. You also have the option to opt-out of these cookies. But opting out of some of these cookies may affect your browsing experience.
Necessary immer aktiv
Necessary cookies are absolutely essential for the website to function properly. This category only includes cookies that ensures basic functionalities and security features of the website. These cookies do not store any personal information.
Non-necessary
Any cookies that may not be particularly necessary for the website to function and is used specifically to collect user personal data via analytics, ads, other embedded contents are termed as non-necessary cookies. It is mandatory to procure user consent prior to running these cookies on your website.
SPEICHERN & AKZEPTIEREN